What is a pediatric dermatologist? 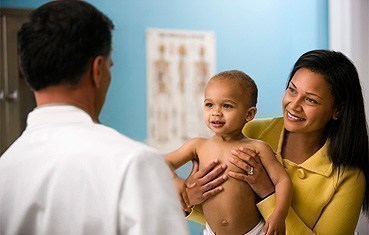 Skin disease can affect children differently, and a pediatric dermatologist understands these differences.

Eczema, or atopic dermatitis, is a chronic condition diagnosed most often in children with a family history of the condition or other allergies. At two- to six-months old, a baby may develop this condition as itching, redness, and small bumps on the cheeks, forehead, or scalp. Left untreated, it will spread to the arms and trunk. Later in childhood, it may appear scalier and more often at the elbows, knees, wrists, and ankles. Sixty percent of babies who have it will outgrow it. The condition can be treated successfully, but there is no cure for it.

If your pediatrician suspects atopic dermatitis, he or she may arrange for a dermatologist to examine your child. Dr. Halem recommends avoiding long, hot baths and moisturizing frequently (with an unscented cream) to help control the condition. Dr. Halem may recommend non-steroidal or steroid creams and antihistamines for itching. Contact dermatitis occurs when baby is exposed to potentially irritating substances such as bubble baths, rough fabrics, or even a child’s own drool. It usually clears up when the irritant is no longer present. If a child is allergic to a substance, such as shoe glue, clothing dyes, or nickel jewelry, dermatitis will appear within several hours of contact.

Parents may be surprised when their lovely newborn develops any number of rashes and skin conditions. A majority of these conditions are relatively harmless and clear up on their own or with appropriate treatment. Knowing which ones can be cause for concern can save you worry in the long run.

Diaper rash affects more than half of infants and occurs most often between 8 to 10 months, when babies start to eat solid foods. Culprits include chafing, prolonged contact with urine or stool, yeast infections (sometimes caused by antibiotics), or a reaction to diaper material.

To prevent diaper rash, change soiled diapers promptly. Clean your baby’s bottom with gentle baby wipes or use a squirt bottle of water to keep from rubbing too much; pat dry and consider applying a small amount of petroleum jelly (talcum powder can cause breathing problems). Use soap only when stool won’t come off easily. Avoid using rubber pants and keep your baby’s diaper loose (but not too loose), especially at night.

Dry skin is common. It can occur at any age and for many reasons. Using a moisturizer often helps repair dry skin. Dermatitis means inflammation of the skin. It can cause an itchy rash or patches of dry irritated skin. The earlier dermatitis is diagnosed and treated the better. Without treatment, dermatitis often gets worse. It is best to seek treatment if you child experiences dry skin before additional spreading or irritation occurs.

Nobody really knows why babies get them or why some kids have small birthmarks and others have bigger ones. They just seem to happen.

There are two main types of birthmarks: pigmented birthmarks and vascular birthmarks.

Pigment is a fancy word for color. These types of birthmarks happen when you have more pigment in one part of your skin. It’s like a spot on your skin. The types of pigmented birthmarks are:

Cafe-au-lait (pronounced cafay oh lay) is French for “coffee with milk,” which is the color of these spots, kind of light brown, when they’re on light skin. On dark skin they can be the color of black coffee. They can be small or big and often are oval-shaped. The spots might fade as you get older, but they probably won’t go away totally.

Your heart and blood vessels — the little highways that move blood through your body — are your vascular system. Sometimes a bunch of extra blood vessels will clump together, and you can see this clump in your skin. This is called a vascular birthmark. More than one in 10 babies has this type of birthmark. The different kinds are:

It’s a big word (pronounced he-man-gee-oh-ma), and sounds scary, but these birthmarks are usually harmless. There are two types: the kind that shows up on top of your skin and the kind that is deep in your skin. The ones on top are called strawberry hemangiomas because they’re bright red and look like the fruit. Deep hemangiomas are bluish-purple and make the skin swell and bulge. This kind shows up after a baby is born. For the first year, both types can get bigger and bigger, which can look a little scary to parents. The good news is they usually start shrinking. Most hemangiomas become flat by age 10, and many become flat even earlier. They can leave a light mark behind.

These marks often show up on the face, and they’re the color of wine or grape juice: pink, red or purple. They don’t go away on their own and can get bigger as kid

What to do about birthmarks?

Birthmarks almost never hurt you. For most birthmarks you don’t have to do anything. Babies who have vascular birthmarks usually need to see a skin doctor (dermatologist) to find out if it needs to be treated. This is important when a birthmark is in a certain spot like near the eye or near the lip.

Dr. Halem can tell you if there are ways to make a birthmark fade or become lighter. 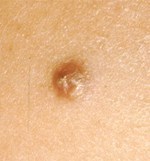 If you are born with a mole, it is considered a birthmark. People often call these birthmarks “beauty marks.” But not all moles are birthmarks. Moles usually are small, round brown spots (no bigger than about the size of a pencil eraser), but they sometimes can be larger and can be different colors. They can be pink, skin-colored or black. Some are flat and smooth; others are raised above the skin like a slight bump. Some moles go away, but you also might get more moles on your body as you get older. If you notice a mole that itches or bleeds, or if it looks a lot different than your other moles, ask your parents to take you to the doctor. It is important to have it checked out and make sure it’s OK. 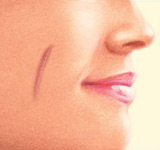 Keloids are bumps that can show up after ear piercing. They’re more likely to happen in African Americans, although no one knows why. Surgery, medicine, and even freezing these bumps with a special chemical can help make them smaller, though it’s hard to get rid of them completely.

If your child experiences keloids it is best to seek treatment right away before they become larger.